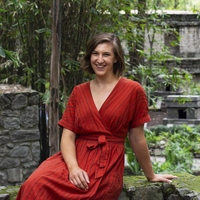 I am a third year graduate student in Cognitive Psychology and Language Science with a Specialization in Cognitive and Affective Neuroscience. My research interests lie at the intersection of cognitive psychology and sociolinguistics. I am particularly interested in the production and comprehension of dialectal variation, bilingual language use, and the neural and cognitive representations of contact languages.

My project translates lab-based research methods–including lexical decision, word association, and network science–directly to the field in a study of bilingual language control with Palenquero-Spanish speakers. Palenquero, a Spanish-based creole language spoken on the northern coast of Colombia, shares most of its lexicon with Spanish; however, the languages are mutually unintelligible due to systematic syntactic and phonological differences. This language pair provides a unique opportunity to investigate the similarity (or dissimilarity) of the representations of the lexico-semantic spaces of Palenquero and Spanish in bilinguals.