Language comprehenders must incorporate a variety of linguistic cues into working memory to form an interpretation of an utterance. Evidence suggests that L2 speakers tend to rely more heavily on discourse-level cues than grammatical cues, compared toL1 speakers, during real-time language processing (see Cunnings, 2017, for review). However, limited research has investigated how discourse and grammatical cues interact in language comprehension, and how this cue interaction compares between L1 and L2 speakers. This study investigates how grammatical number information on pronouns interacts with referential information encoded via their antecedents during cue integration and retrieval. Specifically, we investigate English singular they, a relatively common construction in English in which a syntactically plural pronoun refers to a singular antecedent (e.g., A student should study if they want to get ahead.). In manipulating a discourse cue (i.e., referential status)of the antecedent, we provide insight into how L1 and L2 speakers incorporate grammatical and discourse cues during online language processing and offline language interpretation.

In a self-paced reading task, L1 English monolinguals (N= 32) and L1 German-L2 English speakers (N= 29) read sentences containing either a singular referential noun phrase (e.g., that jogger at the intersection) or a nonreferential noun phrase (e.g., a jogger)as a subject. In a second clause, this subject was referred to using a singular pronoun (either he or she) or a plural pronoun (they). Following each sentence, participants answered an interpretation question probing whether the subject of the sentence was singular or plural. See Figure1 for a sample stimulus item. Prior to the self-paced reading task, participants also completed a brief informal written production task which probed for productive use of singular they.

These results suggest that L2 speakers were not sensitive to the interaction between the referential status of the antecedent and grammatical cues of the pronoun, but were still sensitive to both cues independently. L2 speakers’ non-nativelike interpretation of singular they may stem from an unfamiliarity with the construction, since an equivalent to singular they does not exist in their L1 German. This may lead to an overreliance on the grammatical cue from the pronoun when forming an offline interpretation. This suggests thatL2 speakers do not always rely less heavily on grammatical cues than L1 speakers during language processing, but that they may have greater difficulty linking grammatical and discourse information across multiple elements in a sentence at the point of interpretation. Critically, these effects appeared in offline interpretations rather than in online reading times, as no reading time differences emerged across conditions for either L1 or L2 speakers. We hypothesize that the lack of reading time differences at the pronoun indicate that both L1 and L2 speakers can successfully bind the pronoun to its antecedent during reading, independent of number information. However, in reaching a final interpretation of the referent, L2 speakers are less able to integrate multiple and potentially conflicting cues relative to L1 speakers. 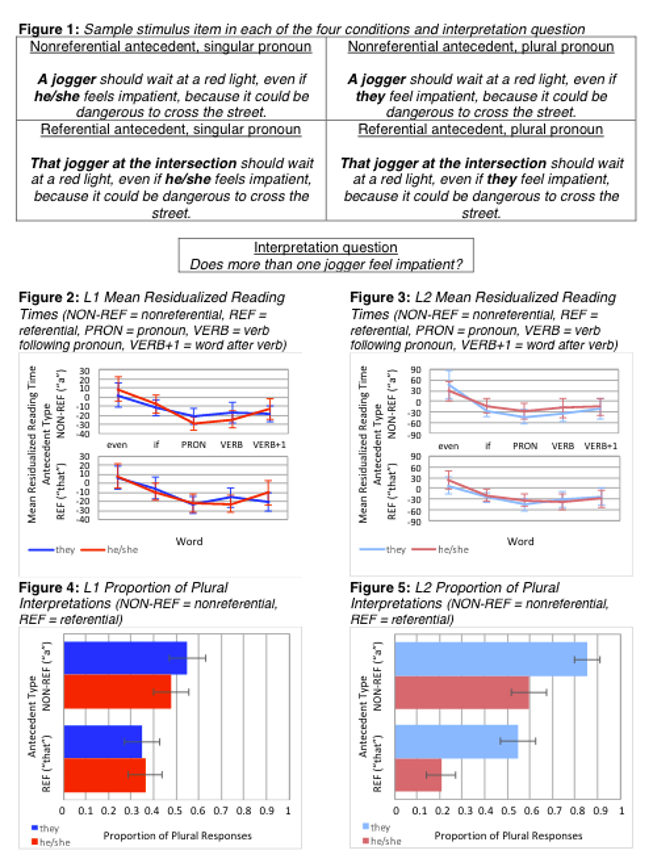