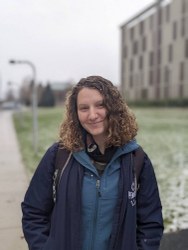 Amira El-Dinary is an undergraduate researcher in her junior year at Penn State. She is studying Communication Sciences and Disorders; her current interests within the field are speech perception and word recognition. Outside of academic interests, Amira is an active hiker and backpacker who enjoys exploring the trails of central Pennsylvania. As she travels to the Netherlands to pursue research, Amira hopes to spend her free time climbing the mountains of Europe.

Studying Dutch-English bilinguals, Amira and her research partner, Amanda Gryskevicz, will conduct research at Radboud University in Nijmegen. Their project consists of collecting speech recognition data from monolinguals and bilinguals to understand the interaction of current theories of speech perception. Amanda and Amira (the A-team) will examine background speech along with known voice effects as the interacting variables in their experiments. They both hope to apply data findings to clinical practices in their future work.