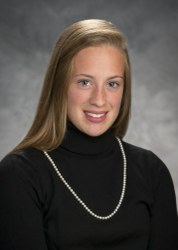 My name is Maggie Rose Pelella and I am a Junior studying Spanish and Science. I am from Binghamton, New York, but despite my Upstate roots, I have always bled blue and white. I followed in my older sibling’s footsteps by making Happy Valley my home away from home. Besides my interests in bilingualism and the Spanish language, I enjoy running, cheering on Penn State football, playing with my golden retrievers, and eating ice cream at the Berkey Creamery.

For the past three semesters I have had the honor of working in Dr. Giuli Dussias’s lab studying the bilingual brain and language processing. This past summer I traveled to Granada, Spain to conduct research on the bilingual processing of idiomatic expressions. I examined how immersed and non-immersed L2 speakers process idiomatic expressions. Specifically, I am interested in observing the time points at which the literal meaning of an idiom is activated compared to the time points at which the figurative meaning of an idiom is activated. In my research, I manipulated the ISI (InterStimulus Interval) between the so-called prime (i.e., the Spanish idiom) and the target (i.e., the English word that will be presented following the idiom). Figurative language, especially in the form of idioms, comprises a large portion of daily communication. Therefore, knowledge of common idioms is imperative in becoming proficient in any language.

This summer I will be traveling to Bogotá, Medellín, and Palenque, Colombia to conduct research on the processing of Spanish dialectal variation by native Spanish speakers. Understanding how native speakers of a language process dialectal variation is crucial in order to explain how individuals communicate with one another despite great differences within a language. I plan to examine how the aspiration of the /s/, which is a feature of many varieties of Spanish, is perceived by native speakers, and in what situations the perception is best facilitated. My experiment will explore how this perception is influenced by only hearing a single Palenquero speaker, as compared to the sister experiments that will investigate the effects of multiple speakers.