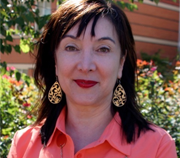 Professor Laura Ann Petitto, a Cognitive Neuroscientist, is the Co-Principal Investigator, and Science Director, of the National Science Foundation's Science of Learning Center, "Visual Language and Visual Learning, VL2"at Gallaudet University. She is also a Professor in the Department of Psychology at Gallaudet, an affiliated Professor in the Department of Psychology at Georgetown University, and the Scientific Director of her ownBrain and Language Laboratory for Neuroimaging. She is known for her role in the creation of the new discipline,Educational Neuroscience, and is one of the Co-Founders of the PhD in Educational Neuroscience at Gallaudet University. She is known for her scientific discoveries concerning language and its neural representation in the human brain, how young children acquire language, the shared signed and spoken language processing sites and systems in the human brain, the bilingual brain, and the reading brain. Petitto received her Masters and Doctoral degrees from Harvard University's Graduate School of Education, Department of Human Development and Psychology (Language and Cognition Track) in 1981 and 1984 (Ed.M. and Ed.D. respectfully). Petitto has won continuous Federal and/or Foundation funding for the past 30 years. She is the recipient of over 35 international prizes and awards for her scientific achievements and discoveries, including the 1998 Guggenheim Award for her "unusually distinguished achievements in the past and exceptional promise for future accomplishment" (Neurosciences category). In 2009, Petitto was appointed a Fellow of the American Association for the Advancement of Science, and a Fellow of the Association for Psychological Science (APS).